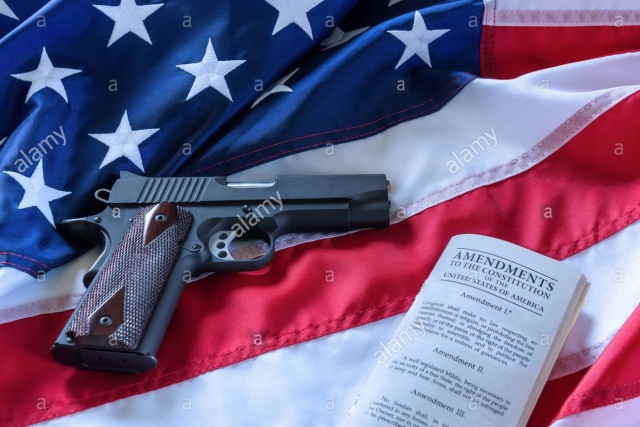 Last week, Chelsea Clinton tweeted ‘The Border Line Shooting in Thousand Oaks, California is the 304th mass shooting in America this year.’ The tweet was in relation to an incident in Malibu, wherein Ian David Long, a Marine veteran opened fire in a club, killing over a dozen people. Such horrifying incidents are not uncommon in USA, as the country has as of late, witnessed similar shootouts namely the Parkland school shooting, the Texas Church shooting etc. These incidents raise an important question i.e. why is it easy for a common man to go ahead and commit such heinous crimes in America.

I attempt to answer the said question in this post, by discussing the Second Amendment of the United States Constitution. First, I shall discuss the relationship between the U.S. Federal Government with the states and explain how the same is different from our Constitution. This shall be followed by a discussion on the Second Amendment and the post shall be concluded with the law on firearms in India.

1. Overview of the Federal-State relationship in USA:
The history of US played a crucial role in the drafting of its Constitution. The country was an amalgamation of people from several parts of the world (becoming the states) and was later colonized by the British. The tormenting past of colonial masters was the reason why the states did not want a strong Centre as they feared the possibility of their brutal past repeating itself. This thought was successfully incorporated in the Constitution. Accordingly, the federal government was vested with limited grounds on which it could legislate and the rest was left to the domain of the states [U.S. Const. art.1, § 8]. These grounds inter alia include collection of taxes for common defence and general welfare, regulation of commerce, establishment of post offices, constitution of federal courts etc.

The power of the federal government was further curtailed by the passing of several amendments (collectively called the Bill of Rights) which imposed additional restrictions on its legislative power. Interestingly unlike the Indian Constitution, its counterpart in USA did not have a chapter on Fundamental Rights in its original Constitution. These rights were added by the above amendments, which aimed at protecting them from federal intervention.[1] However, by virtue of judicial interpretations, the rights guaranteed by the amendments were later made immune from state intervention as well [Mc Donald v. City of Chicago]. Therefore, currently neither the federal government nor the states can take away the rights guaranteed under these amendments.

In India, the division of powers between the Central government and the states is fairly clear and is enlisted in the Seventh Schedule of the Constitution which contains three lists. These lists delineate the subject matters of the two governments, with the Union List laying down the grounds on which the central government can legislate, State List concerning the grounds for the states and the Concurrent List, enlisting grounds for both. The residuary power is retained by the Centre.

‘A well-regulated militia, being necessary to the security of a free state, the right of the people to keep and bear arms, shall not be infringed.’

Originally, the interpretation of the amendment focused on the phrase ‘well-regulated militia.’ The term militia dates back to the 18th-century America, wherein all able-bodied males at least seventeen years of age and physically capable of bearing arms to defend the state were eligible to join the militia. This group of citizen soldiers was trained, if called into service, to leave their day-to-day jobs, gather their arms from their homes and stand ready to repel invasions and resist tyranny of the federal government. This interpretation was called the collective rights theory.

However, a contemporary interpretation of the amendment suggested that the amendment empowered every citizen with a ‘right to bear arms’ so as to repel any danger. This theory was called the individual rights theory. The difference in the two interpretations is of the nature of right. The collective rights theory allows a citizen to bear arms only in cases of a well-regulated militia (i.e. to repel the tyranny of the federal government) whereas the individual rights theory allows a citizen to bear arms to repel any danger whatsoever.

Judicial Interpretation:
The above discussed theories have been applied by the Courts whenever an issue regarding the amendment has come to light. The collective rights theory held the field for several decades but was later substituted with the individual rights theory.

The first decision on the amendment dates back to 1876 in the case of U.S. v. Cruikshank, which involved the members of the Ku Klux Klan, who did not allow African Americans the right to bear arms. The Court siding with the collective rights theory, held that under the US Constitution, a citizen did not have an individual right to bear arms. This was followed in the decision of U.S. v. Miller, wherein two persons were arrested for carrying an unregistered shotgun across state lines, which was prohibited under the federal law. Dismissing the contention that bearing arms was a constitutional right, the Court held that,

“In the absence of any evidence tending to show that possession or use of a ‘shotgun having a barrel of less than eighteen inches in length’ at this time has some reasonable relationship to the preservation or efficiency of a well-regulated militia, we cannot say that the Second Amendment guarantees the right to keep and bear such an instrument.”

The restrictive interpretation of the Amendment continued for over 70 years till the watershed moment in the case of District of Columbia v. Heller. The case centered on Dick Heller, a licensed special police officer in Washington, D.C., who challenged the nation’s capital’s handgun ban. For the first time, the Supreme Court ruled that despite state laws, individuals who were not part of a state militia did have the right to bear arms. As part of its ruling, the court wrote,

“The Second Amendment protects an individual right to possess a firearm unconnected with service in a militia, and to use that arm for traditionally lawful purposes, such as self-defense within the home.”

Here the Court abandoned the collective rights theory and adopted the individual rights theory. The Court reached this conclusion by breaking the clause into two parts i.e. the preface comprised of the Militia clause and the operative clause enumerating the individual right. The Court however, laid down few limitations on the right as well i.e. prohibiting the possession of arms by mentally unstable individuals and convicted felons and only allowing the possession of weapons that are not unusual and dangerous.  Apart from the above, scope of further regulation and restriction was left on the government.

Since, ‘arms’ or ‘guns’ do not feature in the designated subject matters on which the federal government can legislate, the regulation of this right falls within the ambit of the states, leading to different regulations in every state. For instance, in Nevada you can buy firearms without a background check, license or a weapon registration whereas the same is mandatory in New York. This differential regulation is the major reason that states with lax laws, are more likely to suffer from gun violence. The federal government’s hands stay tied because of the Constitution.

Gun laws in India:
The Constitution of India does not guarantee its citizens a right to bear arms. In fact, Article 19(1)(b) categorically lays down the right to assembly without any fire arms, thereby giving a reasonable conclusion that a citizen does not have the right to carry arms in public. The ground of ‘arms, firearms, ammunition and explosives’ is provided in Entry 5 of the Union List, which makes it an area on which only the central government can legislate. The government in furtherance has passed the Arms Act, 1959 and the Arms Rules, 1962 (amended in 2016). These enactments lay down a robust and safe mechanism for the possession and use of fire arms in India.

Furthermore, an individual is entitled to apply for the grant of license only if he/she is placed in the following circumstances i.e. (a)  a threat to life/property due to the nature of their business, profession or otherwise, requiring protection; (b)  he/she is a dedicated sportsperson and is an active member for the last two years of a shooting club, rifle association and needs the weapon for pursuing the sport; and (c) he/she has served in Defence Forces, Central Armed Police Forces, State Police Forces and has the genuine requirement to protect his/her life [Rule 12].

The detailed procedure for obtaining the license is explained in the diagram below:

If we compare the gun laws in India and USA, it can be concluded that the former has stricter laws and therefore, experiences lesser gun violence as compared to its counterpart.[2] The rationale behind this difference is the ease of passing laws in India in matters of arms, as the central government is empowered to do so.

In my opinion, although we cannot change the structure of division of powers in USA, the menace of shootouts can still be rooted out, if the states come together in harmony and along with the federal support, introduce strict uniform legislations regulating the right to bear arms. Sadly, the victims of this inactivity of the states are the common citizen of America, who fear for their life while stepping out from their homes.

[1] These amendments have guaranteed the Right to Religion, Free Speech, Right against Quartering etc. to the citizens of America.

[2] According to the National Crime Records Bureau, only 11% murders were committed with licensed guns in India between 2010-14.

Yesterday the Calcutta HC quashed a Leave India Notice issued to a Polish national studying in India. The notice was issued as the student had participated in two political rallies against the Citizenship Amendment Act. I analyse the judgment and argue that the Court's end result is laudable but the path it chose to reach it is questionable. Share your feedback in the comments.
Here I discuss the recent 'Leave-India Notices' issued by the Foreign Regional Registration Office to several foreign nationals, allegedly on the ground of indulging in anti-government activities. I also explain what is a Leave India Notice and when is it issued. Feedback is welcome.
There has been excessive debate over Andhra Pradesh government's Bill establishing three capitals in the state. In the latest post on my blog, I discuss the Bill and attempt to answer the question of who has the power to declare a territory as the state's capital i.e. the Centre or the State government? Feedback is welcome. #law #andhrapradesh #threecapitals #constitution
Just a gentle reminder to our political leaders that it is against the law to make speeches that seek votes in the name of religion. #law #delhielections2020 #constitution #constitutional #india
Happy Republic Day to all my fellow Indians! On my blog today, I am sharing something very special and close to my heart i.e. my reasons on why I love the Constitution of India. Even if this post convinces one of the Blog's readers that our Constitution is a unique Indian document, the purpose behind it would be served. Jai Hind!
Happy Republic Day to my fellow Indians 🇮🇳 Let's take a resolve to uphold the principles and values enshrined in our beautiful Constitution. #republicday